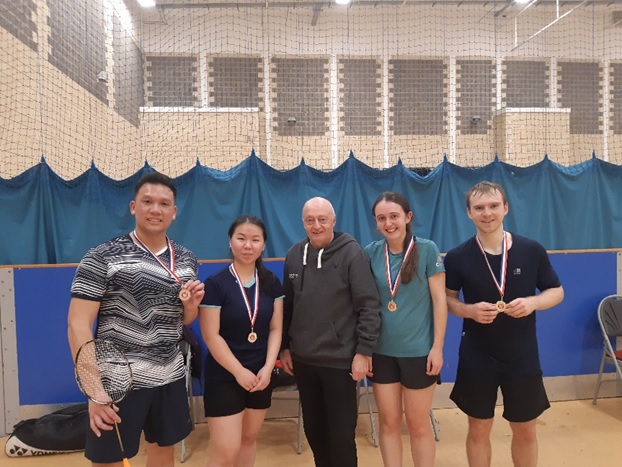 The Seconded Graded Event took place in Ebbw Vale on Saturday 12th November and what a great event it turned out to be.  The venue looked magnificent and the pre-event work by Louise Crump and the Facilities staff needs to be acknowledged and thanked.

Nearly 60 participants took to the courts and battled it out over an intensive day of competition with some fantastic matches being played out.

The Mixed Doubles saw a very intelligent display with Sarah John and Jack Elvis taking the title from Emily Hung and Alex Cheung in 2 tight sets.  Although there was a notable mention for Jack’s semi-final win against, his mum, Sian Elvis.  The match was the one to watch for any family sentiment but unfortunately the tabloid press had nothing to write about as everyone was on their best behaviour.  And a great match ensued.  Well done to all.

The Men’s Doubles had 18 pairs compete with a great combination of youth and experience on show.  The event was won by a deservingly won by Matt Barrell and Swang Nguyen against the ever-brilliant Chris Short and Chris Jeynes.

Women’s Singles saw Bristol Uni player Joyce Chan play some fantastic badminton getting past everyone including Emily Hung in the final.

The Men’s Singles had another larger draw and saw a revitalised Dan Kite take the title off Will Vaughan in one of the matches of the day 23-25 21-19 21-19.  A great effort from both players.

The event ran brilliantly due to all the hard work of Huw John, the Crumps and the Ebbw Vale club.  And the presence of the Court Officials led by John Walsh and Simon Ewins and ably supported by Charles Dalton and Hashmi Pugazh.

This was the second of 4, Senior Graded event (The first being in Bryn Estyn in September) used as part of the selection for next summer’s Graded International in Scotland.  Next up will be the Cardiff Graded in January 15th where we hope to see everyone again competing at such a high level.